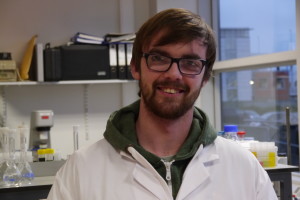 Congratulations to Insight researcher Wayne Francis who had his work recently selected as one of the top 48 student contributions out of ca. 750 accepted abstracts at the 19th International Conference on Miniaturized Systems for Chemistry and Life Sciences (MicroTAS 2015). His poster presentation, titled “Electro-tactic Ionic Liquid Droplets,Authours: Wayne Francis, Klaudia Wagner, Stephen Beirne, David Officer, Gordon Wallace, Larisa Florea* and Dermot Diamond”  describes self-propelled ionic liquid droplets guided to desired destinations across an aqueous-air boundary through the use of electrochemically generated dynamic chemical gradients. This effect is of great interest and drew a lot of attention from the scientific reviewers as it describes for the first time a synthetic system that mimics electrotactic biological organisms. Wayne was awarded the CBMS Student/Young Researcher travel grant of 1000 USD for his contribution. MicroTAS is one of the most prestigious conferences in the microfluidic field, and reports latest scientific achievements in microfluidics, microfabrication, nanotechnology, materials and surfaces, and detection technologies for life science and chemistry, among others.

This year, the conference will be held between 25th- 29th of October in Gyeongju Korea.